Originally appeared in the March, 1989 issue of Mythprint.

Caroline Stevermer joined us for the discussion of her books, and brought along Sorcery and Cecelia‘s co-author, Pat Wrede. Both of Caroline’s books (unlike her earlier, alternate Renaissance murder mystery novels about Nicholas Coffin, The Alchemist) were the fruit of playing the Letter Game. This is a game in which one person writes a letter to another, taking on some imagined character, implying a whole secondary world or society. If the game is to be played out, the receiver must respond in kind.

Caroline learned about the Letter Game in college from Ellen Kushner, one of her closest friends at Bryn Mawr. She has frequently played the game, which often has some sort of content or theme aside from the fictionalizing/fantasying creation of a story or secondary world. Usually the game runs only a couple of exchanges, but sometimes it runs for a long while. It is played for itself, not with the object of publication, but Caroline has had two published novels as outcome. We decided to start our discussion with The Serpent’s Egg.

Egg was bom in an exchange of letters with Margaret Purdy, to whom the book is dedicated. Originally, this playing of the Letter Game, whose topic was clearly the subject of Honor, was left unfinished, but ten years after, Caroline realized that she could now return to it, with more to say about Honor, and finish it as a novel. Margaret Purdy Dean graciously consented to have her letters included in the novel.

I had wondered about the period of the novel, because at one time, when the book was tentatively titled Web of Dreams, Caroline had described it as “alternate universe Elizabethan,” or so I recalled, and yet it felt more Jacobean to me, except of course for the dominant, rather Elizabethan queen who reigns in the book. Caroline confirmed that there were elements of both, but after all the two periods are immediately successive in our history, and blend and overlap in many ways.

My other big question concerned the magic in the book, which, while certainly interesting and perhaps well done, seems extraneous to the main plotline. I recapped Ellen Kushner’s account of how she was prepared to insert a magical prophetic, tarot-reading scene into Swordspoint to get the book published in a fantasy market, if the publisher had insisted on a magical element. Was this a requirement for publishing Serpent’s Egg? Well, the answers to this question were two: yes, this was a naked marketing ploy. And no, the serpent’s egg portions weren’t simply an add-on, but in a number of ways deepen, reinforce, and open other dimensions on the main themes of the novel.

Apparently the manuscript was never prepared without the serpent’s egg, although this was not an aspect of the original Letter Game with Margaret Purdy. For Caroline, in this book there are two worlds and levels of meaning and action: the material world and the metaphorical. Part of this she traces to a poster that used to hang in her publishing office (she has worked in various New York publishing houses as an editorial assistant). This poster was an artistic representation of a real place, Oyster Bay. There were days in which she rather wished to be able to walk into the picture and be at Oyster Bay, and days when she realized that on some level she was able, and did so. The egg provides a way for a person in the world of the novel to bring these two levels together. But to remain human and sane, one must be able to keep these levels distinct; hence the danger of the egg.

This was the touchstone for repeated discussions returning to this theme in reference to both books, although it would seem that they present in some ways opposite conclusions. Magic itself is a metaphor, then, and in this book the metaphor is for madness — which seems to be the usual underlying metaphor for much fantasy. As Chrysafer, the apprentice librarian, gets a grip on controlling the egg, she starts to lose her hold on reality. Magic is mostly too dangerous for people to handle. Basically, to Caroline, magic represents unbalance, and most balanced individuals function without any need to resort to it. This is why the attempts to employ the considerable power of the egg mostly only duplicate what might have been, or is, accomplished by ordinary means. Caroline seems to think that even approached “in a nobler spirit” (as Dr. Jeckyl puts it) the egg would be too perilous to be truly useful, and someone like Queen Andred would lock it permanently away. Its peril and its beauty are united in the hatching. The dragon is born in fire and song and escapes all earthly bonds, as a young editor once yearned to escape through a poster on the wall. But Debby Jones argued that in a world in which magic truly exists, as in this story, there would be a natural equilibrium in which magic would not prove unbalancing. This seems to be demonstrated in Sorcery and Cecelia.

Marianne Hageman asked about the strange characters of Morwen and Maude. These characters have real-world antecedents in Caroline’s college friends, Mimi [=Maude] and Ellen (Kushner) [=Morwen]. Caroline’s college alter ego was Lady Ann Fairfax of Thrax, something she confessed to us only because she was confident that we all had similar skeletons in our pasts and/or presents. Rather than belying her words with derision, the ensuing laughter confirmed them.

There is no debt to the Gormenghast books, because Caroline has never read them, despite what I saw as an opening scene in Chrysafer’s library strongly reminiscent of Rottcod’s Hall of Bright Carvings.

Another impulse for this book was to see what would happen if the obvious hero, Tilbury, were killed. This prompted some protest, for surely Tilbury was the villain. In explaining this to us, Caroline revealed a remarkably analytical and distanced view of her secondary world. From the perspective of history, or of the populace, Tilbury would have been the shining hero, and even had he carried out his evil designs against the queen, murdering her and all her variant supporters, he would have become a good and effective king. Rather as the Henrys Tudor did. There is no divine right behind this monarchy.

One of Caroline’s favorite scenes is in the rowboat at the end. When she wrote it she had never been in a rowboat, and was later pleased to discover that her description was not off, when she rode in her first rowboat — upon Lake Superior. Caroline is not one to do things by halves. One thing that surprised her in this scene was the fate of Queen Andred’s ring, which she had been fully expecting would be returned to its owner, as the queen had directed Lady Margaret.

Queen Andred, by the way, never really suspected her nephew of any treason, and only had him imprisoned for his own protection.

We turned to discussing Sorcery and Cecelia. Pat Wrede, the coauthor, explained that the setting of this novel is a world in which magic has long existed, but in which it has been very imperfectly understood. It is only recently that the Royal College of Wizards has really begun the scientific study of Magic, and it is still a subject of considerable debate, in which some debaters go so far as to deny its existence. Rather as some medical doctors deny the usefulness or efficacy of chiropractic treatment, someone suggested. This resulted in considerable discussion, with some arguing that the world was imperfectly imagined, failing to operate logically, given these precepts. Others argued that most of the objections raised were easily paralleled in the real world, and that other differences might be explained by the alteration of natural and social laws due to the existence of magic itself. Finally, we concluded that the logical arguments we were tending towards were pretty silly applied to a book which is primarily a fantasy romp through the worlds of Jane Austen and Georgette Heyer (who should have been acknowledged in the dedication along with Austen and Tolkien, agreed Wrede and Stevermer. “You can do that in the sequel”, suggested someone.) We all thought this was delightful fun, except for Joan Verba, who doesn’t like Regency romances.

Joan also dislikes epistolary novels, and found the first part of the book tedious going, because she didn’t care for the lighthearted, pastiche premise. She was finally intrigued by the working of the magical investiture, of power in the chocolate pot, and became interested in seeing how the plot worked out, along with the mechanics of the enchantment and its effects. This lead me to ask about the thematic content of the book, as Caroline had insisted that her books must have a more serious theme, as honor was in Serpent’s Egg. Is there more here, I asked, than a comic romp or a playful, metaficlional pastiche? Caroline responded that the theme here was families, completely shutting me up at the appropriateness and obviousness of this answer.

For Pat, the book is about all those little things that so often get overlooked: how ties are tied, jackets ironed. The book has been described as a love letter to the British mails, she told us. (Besides Honor, Serpent’s Egg is about the difficulty of finding good help, observed Caroline. Tilbury loses because he cannot find competent thugs and blackguards. Even his evil magician proves no more competent than a teenage apprentice.) We observed that the reliability of the mails was essential to the development and unfolding of the epistolary novel, and speculated about how some of the chapters might have developed differently if the narrator hadn’t received the previous letter. Pat and Caroline noted that is possible to play with this in the actual playing of the Letter Game. On another level, they described how the U.S. Postal Service had been unable to keep up with the playing of Sorcery and Cecelia when they were sending the original letters back and forth. One day Caroline was quite astonished to receive a letter under her door when Pat couldn’t wait for the Postal Service to deliver Cecelia’s letter.

On the subject of how collaborative differs from solo writing, Pat observed that she regularly runs into a veil when writing by herself. She finds the writing stuck at some point in the story when she is at least temporarily unable to resolve some plot or thematic or character twist. Sometimes the eventual outcome of the story may be clear, but she cannot figure out how to resolve the problem with the outcome. With a co-author she simply ends the letter and leaves it to Caroline to resolve the problem. In general, they were never stuck on the same points or kinds of issues. So it was delightful, said Pat, to see how cleverly and logically Caroline would resolve the problems. Of course this led to the irresistable temptation of each writer to set the other up with a dilemna or difficult situation. We discovered, on hearing of some of the little “surprises” that Pat and Caroline had each sprung upon the other in their letters, that these were many of the points and characters that so delighted us as readers.

Someone asked about the cover and title: were these their choice or the publisher’s? Caroline told us that they had been pretty disgruntled by the cover, but delighted by the fact that Kate’s hair was apparently about to fall down, and that she resembled Ace editor Beth Fleischer. As for titles, some that had been considered were Wizard’s Apprentice, Regency Magic, Pride and Pentacies. and the authors’ favorite, The Enchanted Chocolate Pot. 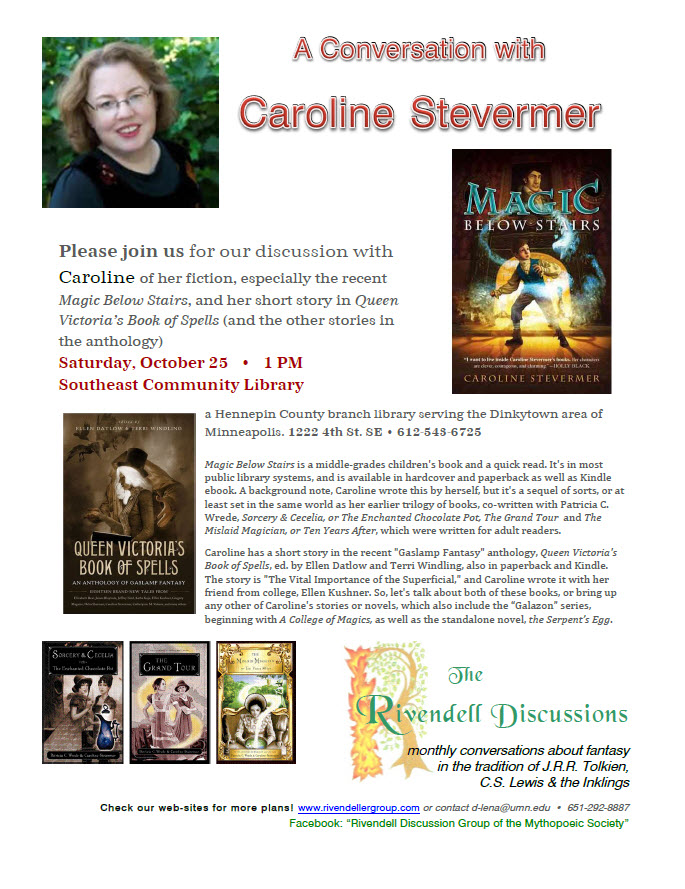