A group for the serious discussion
of speculative fiction
welcomes interested beings.

Folks,
Second Foundation is a speculative fiction book discussion group that’s met about every six weeks for 25 years (since January 29, 1983). In recent years we’ve met in a member’s house with limited space, so we’ve been low-key about advertising the meetings. We’re now trying the experiment of meeting in a public place, so I’m trying the further experiment of notifying a wider range of friends and acquaintances.
Next meeting:
Sunday, May 11, 2:00-4:00 p.m.
Merlin’s Rest, 3601 E Lake St, Minneapolis. “A British Isles & Irish Pub”*
Topic: THE WORKS OF GREG EGAN.

Books that group members have recommended include Quarantine (1992; book 1 in a series); Permutation City (1994; sequel to Quarantine); Axiomatic (1995; story collection); & Dark Integers and Other Stories (1998). Of course, if you can’t find those books in a local library or bookstore you’re welcome to try something else by Egan. If you don’t get a chance to read Egan but the idea of an SF book discussion group intrigues you, it’s okay to stop by and see if you like the quality and flavor of discussion.

Hope to see you there.

*They serve a British Isles breakfast till 2:00 p.m., so if that strikes your fancy you might want to show up a few minutes early.

2007 December 2 Meeting; 2 PM
Our annual “Persons Read Favorite Stories by Writers Other Than Themselves” meeting, at David Christenson’s NEW place.

2005 Meetings:
January & February joint discussions of the Extended Lord of the Rings Return of the King DVD, with The Rivendell Group & The MN Tolkien Society.
March meeting will be AT MINICON, topic: Good Omens, by Terry Pratchett & Neil Gaiman.

Sunday, December 5: Our annual “Persons Read Favorite Stories by Writers Other Than Themselves” meeting.

January 25, 2004 meeting jointly with The Rivendell Group, a discussion group devoted to Fantasy. Topic: The Peter Jackson-directed RETURN OF THE KING. 2 p.m. Location: at the Roseville Public Library (Ramsey County Public Library), Co. Rd. B and Hamline Ave. A few block south of highway 36 (Hamline exit), or about 4 blocks east of Snelling Avenue. The photos below were taken at that meeting.

Meeting on Sept. 22
TOPIC: The works of C.L. Moore and Henry Kuttner

December
TOPIC: Annual Readings meeting (companion meeting to the annual “Readings from Rivendell” program in which members read their own stories). In this meeting, people bring stories or passages to share aloud, NOT written by the readers.

January 26 Topic: The Two Towers movie, joint discussion with The Rivendell Group. 1:30 p.m. At Dreamhaven Books 912 West Lake Street, Minneapolis, MN 55408 (612-823-6161) Plenty of free parking located behind the store http://www.dreamhavenbooks.com. It’s also been suggested that we should recognize the eleventy-first birthday of JRRT–. 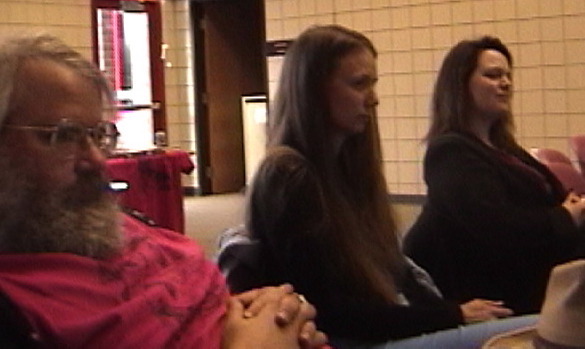 a report by Eric Heideman

from Last Homely Hearth #10, used by permission of the author

Second Foundation, a group for the serious discussion of sf as literature and social speculation, grew out of a vacuum in the Twin Cities reading community. The Minnesota Scienti-Fiction Socieity (MINN-STF), while a warm and supportive social group for its members, has almost nothing to do with discussion of the one interest that presumably links all of those members, science fiction. The Rivendell Group has done an elegant job for, lo, these many years of talking about mythopoeic fantasy. But there had been, to my knowledge, no recent local discussion groups organized around SF.

The line between fantasy and SF is of course a slippery one. Where do Leiber and Lovecraft, Wilhelm and L’Engle fit? What about Shirley Jackson? Even Tolkien, often called the best practitioner of twentieth century fantasy, created in Middle-earth an alternate world as fully developed and internally consistent as anything in SF. Nonetheless, following Damon Knight’s dictum, “Science Fiction is what you’re pointing at when you say ‘science fiction’,” there are certain writers who feel like natural Second Foundation types, others who feel like Rivendell types. If we discuss some of the same writers from the unique angle of vision that each group offers, more power to both of us!
Second Foundation began on January 29, 1983, when Eleanor Arnason, Marianne Hageman and Kevin Stahl met at my then-apartment to talk about John Varley’s fiction. The group moved to the Coffeehouse Extemporé, to the Loft, and to the new Loft (2301 Franklin Ave. E., Mpls.), which is looking like our permanent home. At approximately six-week intervals we’ve discussed Larry Niven (Niven was present, at Minicon), Ursula K. Le Guin, Fritz Leiber, Robert A. Heinlein, Theodore Sturgeon, Philip K. Dick, Isaac Asimov, “dystopias,” with special emphasis on George Orwell and Aldous Huxley, Chelsea Quinn Yarbro (again at Minicon, with the writer in attendance), Arthur C. Clarke, and “neglected SF writers,” Clifford D. Simak, Ray Bradbury, and Harlan Ellison. We’ve made occasional forays to see SF films, and had one VCR session, with videotapes of Forbidden Planet and Dark Star.
Our meetings, while considerably more structured than MINN-STF discussions, tend to ramble more than Rivendell meetings, veering off in to wild digressions, then circling back to the official author or theme. (This is partly due to the fact that we’ve tended to roam across the whole body of a writer’s work, rather than focusing on two or three particular titles, as Rivendell does.)
When Niven showed up for our discussion of his work at the 1983 Minicon, the meeting fragmented into two groups, one discussing his work while the other asked Niven questions. By 1984 we’d gotten more sophisticated at including the subject (Yarbro) in our discussion, alternating between people reacting to her work and asking her questions about it.
There was a very satisfying moment at the Yarbro discussion when a man, asked for his opinion of the Yarbro books he’d read, said “I don’t go in much for literary criticism.” I said, “We’re not doing literary criticism, we’re just shooting the shit,” and he began to talk, learning as he did so that he did, indeed, have opinions about Yarbro’s work. Groups like Rivendell and Second Foundation appeal to the intelligence and sensibility of the Common Reader, avoiding both the shamanic approach of academic criticism (You are helpless to understand this book unless I tell you what it means) and the anti-intellectualism of much fandom (all too often fans, while enormously well read, are unwilling to examine why they like or dislike certain authors or titles in this “literature of ideas.”)
At our Simak discussion, most of us expressed great enjoyment of his work, liking some stories better than others but finding nearly all of them worthwhile. Most of us liked Bradbury and Ellison, but we had a hard time making concrete statements about them; the unique qualities of their work eluded us. Heinlein inspired controversy, as he alsways has, but rather than dividing into pro- and anti- factions, we all seemed to love and hate different aspects of his work. John Rezmerski suggested that, while Sturgeon’s characters seem exceptionally real, we don’t tend to remember particular Sturgeon characters, perhaps because of his ability to make us feel that he is writing about us. Asimov intrigued us by being quite a different writer than most of us remembered him to be-subtler, predominantly interested in ideas and with little interest in traditional adventure. Arsen Darnay suggested that Dick’s The Man in the High Castle mirrors reality: Germany and Japan did win WW II. Le Guin inspired our largest non-Minicon attendance (14 people), and out liveliest discussion. Some praised her without reservation; Eleanor Arnason held Le Guin up to Le Guin’s own high standards and suggested that she is capable of still more.
The people attending Second Foundation periodically shift, but the group’s chemistry seems to consistently work. We stimulate each other, each seeing a book or writer from a personal angle, helping each other see the many different ways a good book can mean. I, for one, am learning that SF is an even richer field than I had suspected, full of an amazing range of talents and visions. And in [three years] we’ve barely scratched the surface.
We meet formally from 1:00to 4:00 pm, then those so inclined meander over to a local bistro for more freewheeling discussion. The whole adventure is great fun. [See calendar for list of future meetings.]
For more information contact Eric Heideman. 825-9353.

[Note of 1/17/98 by David Lenander: Although this introduction is hopelessly out of date, Second Foundation continues to meet regularly, I try to list them above here, even if I don’t think to update this note. I will try to list their meetings on our Activity Calendar, and they’re always in Einblatt  http://www.mnstf.org/einblatt/einblatt-current.html.]