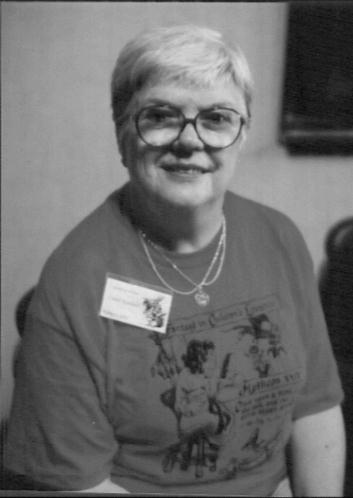 This picture of Carol Kendall was taken immediately after Mythcon 24.

She is wearing the Mythcon t-shirt featuring Sylvia Hunnewell’s drawing of Muggles, a character from Kendall’s novel, The Gammage Cup, writing in her “Maxims.”

Photo by Lenander, used by permission.

I have NO idea of Carol Kendall EXCEPT she wrote my favorite story of all time, The Other Side of the Tunnel. I was 10 years old when I read and committed to memory that wonderful story. I determined then and there, 1958, that if I ever had a daughter I would name her Heather Lynn. Nine years later I did just that. I had the library copy of that book for years. Then I made a big mistake. I loaned my “stolen library” copy to a friend. That was about 10 years ago. I had been looking for a copy ever since. I finally found one thru the Barnes and Noble “books out of print” I was thrilled as was my daughter, Heather Lynn. Needless to say, my book stealing days long past, I was looking for any other books that she may have written and by coincidence found your web page. If by happenstance she is still alive, and you know how to get in touch with her please let her know she provided a little southern girl with hours of enjoyment. I have always been grateful. –Gerri [I have forwarded this note to Carol Kendall–David L]

Guest of Honor at Mythcon XXIV
by Gary Hunnewell

Merry Christmas too! I’m spending mine in Pemba. Prizes given for knowing where that is!

This might not be an unusual thing to find on the back of an envelope if you were a regular correspondent of Carol Kendall. In the past few years I have been fortunate to get postcards, little treasures from foreign lands, every so often when Carol has gone off into the Blue to seek adventure. Over the years I’ve accumulated postcards from Tombouctou, Mali, “May [Tristan] never have to eat porcupine, even though it is considered a great delicacy in Cameroon-and may you never have to cook it. I speak with great authority on the subject;” Narssage, Greenland, “I wish to report a severe shortage of trolls in Iceland, except in bookstores, and none at all in Greenland;” Qufu, China, “Have you ever tried to write a postcard while surrounded by 11 children and a grandfather?;” and San Pedro Sula, Honduras, “I didn’t hire any spells from this witch doctor at Chichicastenargo, at least none I’ll ever admit to!”

Warning Carol that I would be writing this introduction, I asked where she was off to next. “Nowhere,” came the reply. “Not until I finish Fantasy 4.” Fantasy 4 is Carol’s working name for her fourth and last Minnipin book. It has been in the works for several years and those of us who enjoy Carol’s writing have been waiting patiently for it. The first three Minnipin books are The Gammage Cup (The Minnipins in England), The Whisper of Glocken and The Firelings. Of the first book Andre Norton wrote: “There were the Hobbits of the Hill, the Borrowers and now the Minnipins of Slipper-on-the-Water. Such tales are golden events in the publication of children’s stories.”

Carol has not been working on her Fantasy 4 only. She is very proud of her work in translating Chinese folk-tales into English (with Yao-wen Li), published as Sweet and Sour, as well as her first picture book, The Wedding of the Rat Family.,
Possibly Carol’s greatest contribution to children’s literature is her need to share the fact that non-conformists have a place in society and that non-conformity is not wrong or evil, but just different. This theme flows through her books and her talks with children. It is something to which many of us, through our interest in fantasy or science fiction or children’s literature, can relate.

Keep a sharp ear out at the conference if Carol starts to talk about her travels. Once you’ve heard one or two, you’ll find yourself repeating them to your friends. And, by the way, where is “Pemba?”

As this is the last mailing to appear before Mythcon, it’s a good time to think about the works of the Author Guest of Honor, Carol Kendall.

Although The Gammage Cup came out when I was two years old, Carol Kendall never had the opportunity to become one of my childhood favorites. The first I ever heard of her was well over ten years later when I came upon her name in the Postscript of Lin Carter’s Tolkien: A Look Behind The Lord of the Rings, as one of three children’s authors who were evidently influenced by Tolkien. (The others were Alan Garner and Lloyd Alexander; this was, of course, years before the advent of Stephen R. Donaldson and the Tolclones.) But my interest in Tolkien did not manifest itself in a desire to read other authors similar to him, but simply as a need to read and re-read more Tolkien, so it was some years before I investigated these authors.

Kendall readers seem to be divided into those who like The Gammage Cup best and those who like The Firelings best. I’m in the first group. Although The Firelings is superior as a novel, The Gammage Cup has a coziness and straightforward nature that’s very appealing, at least to those of us who find reading about a well-defined fantasy realm to be one of life’s chief pleasures. Also, it was the first Kendall I read, and that affects my attitude a lot.

If I’d tried reading these books as a child affected by Tolkien, I think I would have been disappointed in a way that I was not as an adult. The Land Between the Mountains is not as complex as the Shire, and the land outside is sheer nightmare instead of the varied mixture of wonder and fear that Tolkien presents. The Minnipins’ social structure is a little undeveloped. Although there are a number of references to marriage, they seem to reproduce by parthenogenesis. On the other hand, Kendall is more aware of economics than Tolkien is. One of the marvels in The Gammage Cup is the account of the Five Outlaws trying to make homes and a living out in the wilderness. This would be rather tiring to live through and could easily be tedious to read about, but with the very practical Muggles as principal viewpoint character this section becomes quite interesting. Kendall’s stories are very moralistic, but I certainly do not find them offensive or heavy-handed.

One theme Kendall shares with Tolkien is the idea that no matter how cozy and self-contained one’s home is, it’s not immune to danger from outside. I find Kendall’s handling of this theme to be a bit problematic. Tolkien begins his stories in The Shire, but he doesn’t lead you on to believe that they’ll be about The Shire, and he makes it clear from the beginning that its borders are permeable. Kendall’s initial description of her country, emphasizing its utter separation from any outside world, leads me to feel vaguely disconcerted when the stories prove to be as much about the outside world and its inhabitants as anything else. Yes, I know the revelation that the mountains are not after all impassable is intended to puncture the Minnipins’ complacency that they are, but I can’t help wishing that first we could have had a little more about the Minnipins in the days of peace. Of course, the problem with that is that in days of peace there’s no story, but I still feel a bit frustrated that expectations are set up but not fulfilled. That’s a relatively minor point, however. In general I found The Gammage Cup to be enjoyable, and its five heroes to make an appealing bunch of misfits. I can’t say the same about The Whisper of Glocken, however. As a sequel I found it inferior in most ways. The New Heroes are not as successful creations as their predecessors. Instead of having arguments only when argument is actually called for, the New Heroes are merely perpetually crabby. I found them far less agreeable characters than their predecessors, and far less memorable. Also, the story is not only focused on the outside world, most of it takes place there. Set against that is the fact that the other species in Whisper, the Diggers and the Hulks, are marvelous and delightful creations, far superior to the Mushrooms in The Gammage Cup, who are just anonymous bad guys. The reader is not supposed to feel the slightest empathy for the Mushrooms, as shown by the blood-curdling moment when the Outlaws bottle up the cave so that none of the Mushrooms can escape. Our heroes have defeated the enemy: they’re on the run, they’re outta here, but that’s not good enough, every one of them has to be slaughtered. Did that bother anyone besides me?

(True, no less dreadful was the fate of the orcs who fled Helm’s Deep, but they’d been warned what would happen to them if they didn’t leave and refused to believe it; and, more importantly, they were massacred by an uncontrollable primal force of nature, not by sensitive, artistic Little People with magic swords.)

The Firelings is an interesting exercise in how to repeat the same themes while writing a quite different book. There’s a tribe of small folk living in a kind of irritable harmony in an isolated world. There’s a force of nature that threatens their placid existence. There’s even a mysterious inscription that has to be looked at properly to be understood. And the characters come in fives. Otherwise it’s quite different. Where the Land Between the Mountains persistently reminds me of Lud-in-the-Mist, the Firelings’ culture strikes me as somehow Polynesian. Perhaps that’s because they live in a narrow space under the shadow of a big volcano, and because their culture is not only primitive and colorful, but elaborate and implacable. It is, as I said, a better book than The Gammage Cup, and I couldn’t say whether it’s because of that or despite it that Cup is the book more designed to appeal to Kendall Fandom, such as it is.

Of the three writers mentioned by Lin Carter, Alan Garner is my favorite, though not for The Weirdstone of Brisingamen and its sequel, which are not particularly compelling (though they’re interesting pioneer efforts in one of my favorite subgenres, Fantasy of Place): Elidor and The Owl Service are his masterpieces, and I’ll particularly emphasize the former, as it’s underrated. For all the interesting characters created by Lloyd Alexander in his Prydain books, I’ve never found myself driven to reread them: they just never caught my imagination. (However, Alexander delivered himself of one first-rate animal book: My Five Tigers, the true-life account of his cats, and the best such book I’ve read.) Carol Kendall comes somewhere in-between in my estimation. I do not return frequently to her books, but I’ve found they’ve stuck with me to at least a certain extent, and that’s a notable achievement. Despite the obvious Tolkienian air, the books are not slavish imitations, and have a distinctive style of their own that does not pall even when repeated with considerable exactitude over three books. I don’t know of any other writers quite like her, and I’m pleased she was chosen as Mythcon Guest of Honor. I met her ten years ago (that many? amazing) at the Mythcon East in Delaware, and I’m looking forward to this year’s too.