Ruth was one of the founding members of The Rivendell Group. She was at our first meeting, back in December of ’73 or so, along with David Lenander and Margaret Howes, and others who no longer attend. She was also a founding member of Minn-Stf, the local Minnesota Science Fiction Society, and lots of other activities and groups. This page serves primarily as an introduction to some of Ruth’s activities (basically in the article below, and in the bibliography) and a linking place to the many files that she’s contributed to these pages. Links are at the bottom of the page.

Here is one of Ruth’s poems, reproduced by permission.

The Jovial Sisters have been gathering folktales —

The photocopier repairman’s daughter and the golden drum

The congresswoman’s son and the river dragon,

The engine gremlins and the driver

Who made them driving gloves.

The Jovial Sisters do not name their informants

The book keeps turning up in libraries.

The title’s small and hard to read.

You may miss it.

Look under the rainbow.

Ruth received the Minnesota Fantasy Award at the Fall 2004 Arcana, a convention of the Dark Fantastic. She was also briefly intereviewed and this will appear on Joan Marie Verba’s cable access television program, TV Bookshelf.

A local SF & F Poetry reading, by six associated poets, including Ruth, will also appear in the near future. Ruth Berman’s “The Buried Sword,” one of the Bradamant stories, appears in the June 2004 Asimov’s. This was later incorporated in her 2011 novel, Bradamant’s Quest. A NOVEL, Autumn World, appeared from StoneDragon Press in 2001. (It was since taken over by FTL Publications). This book was co-written by a group of five authors, including Ruth. All of them were once members of a writers’ group today known as the “Aaardvarks.”

Ruth Berman blends a fan’s enthusiasm with a scholar’s learning. As a fan she was a founding member of the Minnesota Science Fiction Society, contributor of hundreds of letters to little magazines devoted to science fiction (SF) and fantasy (called “fanzines”), and editor of the outstanding Star Trek fanzine T-Negative, the general interest ‘zine, No, and The Middle-earth Song Book. She has also been active in the International Wizard of Oz Club, the Mythopoeic Society, the Tolkien Society of America, the Society for Creative Anachronism, and The Fantasy Association (to name a few). Ruth’s formal study of English literature culminated in a Ph.D. dissertation at the University of Minnesota in 1979: Suspending Disbelief: The Development of Fantasy as a Literary Genre in Nineteenth-Century Fiction. She has taught freshman English at the Universities of Minnesota and Oklahoma.

Ruth’s emergence as a fiction writer was recognized in the early seventies when she was guest of honor at Minicon, the .annual Minnesota SF convention, and when she was a nominee for the annual John W. Campbell award for best new SF writer. She has published a couple of dozen short stories, at least three times as many poems, and many critical articles and reviews related to fantasy. She has served as Poetry Editor for both Mythlore and Pandora. Recently, Ruth has been translating fantasy stories from French originals.

When Ruth helped start the Rivendell Discussion Group of the Mythopoeic Society in 1974, I soon became the chief organizer of the monthly meetings, and editor of the newsletter, but there was never any question that Ruth was naturally first among equals in our discussions of fantasy literature in the traditions of T.H. White, Ursula K. Le Guin and C.S. Lewis. Her wide reading, and graduate training, along with her intelligence and taste made her an authority to whom we would inevitably turn for an explanation of the literary background of some text under discussion, or of some doubtful passage, or for suggestions for further reading. Even during the two years that she taught English at the University of Oklahoma, scarcely a meeting would pass here in Minneapolis without someone observing, apropos some literary mystery, “Well, Ruth would know…”

In December of 1976 I heard Ruth read a short story, “The Death of Gawaine,” that struck me like a thunderclap. It remains one of my favorite stories. Although seeming too impossibly brief, it captures and portrays the reconciliation of a dying Gawaine with fate, and the refusal of his wife, a fairy princess out of medieval legend, to be reconciled with that fate, at least without protest. It is like many of Ruth’s stories, short on action, yet economically and subtly capturing nuances of feeling and thought and meaning that are never spelled out by the narrator, but implicit in the way that characters find their own truths and persist in their integrity without.being understood by most other characters. That sort of quiet integrity is common to both the stories and the writer.

This story also suggested a whole new approach to Arthurian legend, another world lurking beneath the obvious surface narratives of Malory or Chretien de Troyes, that of the women of the stories. This idea has since been employed by other writers, notably the bestselling Marion Zimmer Bradley, but none has been more hauntingly suggestive than Ruth’s brief glimpse into a fey and almost feminist Faerie world. Characteristically, Ruth’s story was inspired by reading and mulling over a 14th century legend. Even her creative writing is often inspired by her scholarly pursuits.

In 1974, Ruth co-founded with Eleanor Arnason and Al Kuhfeld a writers’ support group. This group has fostered numerous stories, poems, essays and critical articles. P.C. Hodgell has acknowledged its support in writing her well-received novels, and I believe that Mary Monica Pulver has also read some of her novels-in-progress to the group. I remember attending in the mid-’70s and hearing Pat read from an exciting narrative that would later appear in God Stalk (1982) and Dark of the Moon (1985). Hearing Ruth and Eleanor offer suggestions, and hearing them read and listen to criticism, I was reminded of other official and unofficial groups of likeminded writers (like the Pre-Raphaelite Brotherhood) throughout literary history. Or perhaps even the ancient guilds or brotherhoods of bards, or druids, priests or poets. Quietly, without ostentation, Ruth Berman embodies that history today, creating living and beautiful pasts and futures, for our present.

Not on the bibliography, here’s a link about Ruth’s recent book-length project 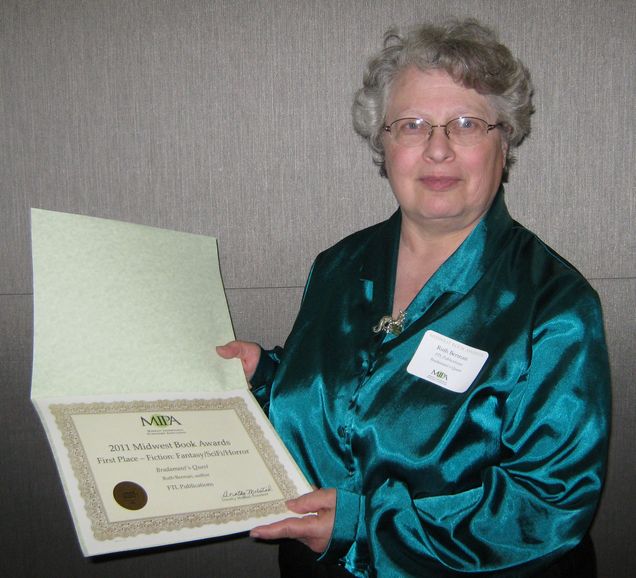 “In a Season of Calm Weather,” a story by Ruth Berman

“An Arnason Note,” a note about Eleanor Arnason’s writing, by Ruth Berman

“The Death of Gawaine,” a story by Ruth Berman