For more than thirty years, the Rivendell Group has been meeting regularly on or near the University of Minnesota-Twin Cities campus to study, discuss and enjoy myth, fantasy and imaginative literature in the traditions of J.R.R. Tolkien, George MacDonald, Christina Rossetti, T.H. White, Ursula K. LeGuin, Evangeline Walton, C.S. Lewis, Peter Beagle, Patricia McKillip, Jorge Luis Borges, John Gardner, and Angela Carter (among others). Formerly, we were also the University of Minnesota Mythopoeic Society, a recognized U of MN student organization. Our constitution is on another page. 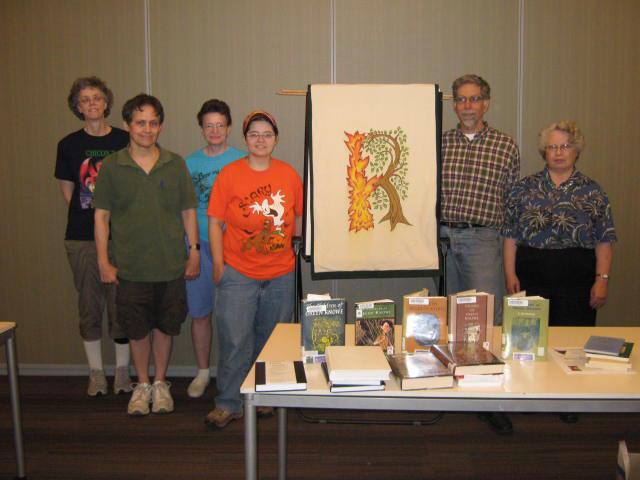 The Rivendell Discussion Group is part of the Mythopoeic Society, a non-profit organization devoted to the study of mythopoeic literature, particularly the works of members of the informal Oxford literary circle known as the “Inklings” (including J. R. R. Tolkien and C. S. Lewis).

For more information, including directions, contact David Lenander, at 651-292-8887; or d-lena@tc.umn.edu

Posted in Rivendell information | Comments Off on Welcome!

Posted in Meeting Announcement | Comments Off on Next Rivendell Meeting

Photo from our September ’06 discussion with Katherine Kohman, author of Lembas for the Soul, a joint meeting with The Minnesota Tolkien Society:

(A photo from a Readings from Rivendell meeting from many years back. Terry Garey, on the right, read some poetry. She has a recent collection on cassette. To her right is Paula Rice Biever (check out her ‘zine, Remnants), and to Paula’s right is Erik Biever, proprietors, Foont Cellars Brewing & Publishing (publisher of our newsletter), and Sally Morem.)

May ’95 Rivendell discussion of the “Enchanted Forest” books with the author, Patricia C. Wrede:

Posted in Rivendell information | Comments Off on Rivendell Photos, Old and New

More about the Rivendell Discussion Group

Elsewhere on this site are some reflections on reading Tolkien by David Lenander that were intended for the Mythlore Tolkien memorial issue, but which were never used, and which included an account of Rivendell activities from years ago. As of 7/27/97, I’ve added some more scanned photographs.

Rivendell is affiliated with The Mythopoeic Society, headquartered in California–but membership in the national society is not required, and most local members are not members. There are other similar groups located in scattered geographic locations about the U.S.A. For more information, see the Mythopoeic Society’s list of groups.

Besides our monthly discussions, we have occasionally sponsored other programs, such as readings of new, original tales by such local writers (and members) as P.C. Hodgell and Eleanor Arnason, or lectures by professors like Stephen Prickett (U of Sussex, England, author of Victorian Fantasy), or U of MN students like Mike Levy, or SF & Fantasy novelists like C.J. Cherryh, Ben Bova, Gordon Dickson and Phyllis Ann Karr. We have also participated in the Mpls. S.F. Convention (“Minicon“), held annually during Easter weekend, the Fourth Street Fantasy Convention, SF Minnesota’s Diversicon, Arcana, and acted as organizing committee for the 24th annual Conference of the Mythopoeic Society in 1993, and other activities. With some of these other organizations, and especially with our “offspring,” the local C.S. Lewis Society and Second Foundation, a group that regularly meets to discuss SF, we have often held joint meetings, worked together on publicity or cross-listed our events in newsletters, etc. We are generally listed in the local MN-Stf organization (Minnesota Science Fiction Society) calendar, Einblatt. On the Einblatt page, you can also read about other Twin Cities area fan activities, including Minicon and Minn-StF meetings

We also hosted a followup to this and to the recent “BREE MOOT” conferences in the midwest (previously, Iowa and Missouri) in May of ’97, coinciding with the revival of the Children’s Theater Company’s production of The Hobbit. See the menu on this page (“Event Archives”) for past Bree Moot conference reports.

We’re particularly proud of the creative and scholarly productions of some of our members, and especially of our annual December “Readings from Rivendell” program, where our members have read many stories and poems that were much enjoyed by all listeners–and in many cases, by later readers when these were published.

Our occasional newsletter over the years is Last Homely Hearth. I plan to add a number of past articles here. See here for the early history of the Rivendell Group. See also the Eleanor Arnason page for some reproduced material from LHH.

Here’s a list of some mythopoeic writers about whom I’ll be adding some more discussion, information, etc. (David Lenander also has more mythopoeic-related content on his personal site, The Bird and Baby.)